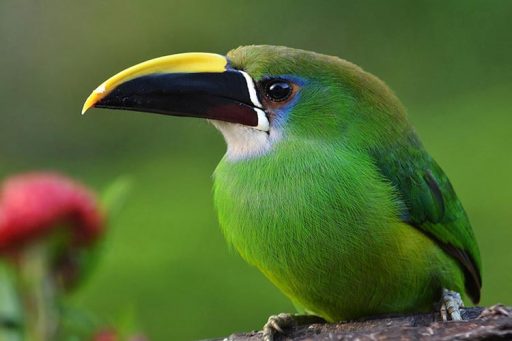 The emerald toucanet is one of the most beautiful toucan specimens. If you are looking for a good partner, do not waste the opportunity to have one.

What is the habitat of an emerald toucanet?

Known by the name of Aulacorhynchus prasinus, it is a piciform bird of the ramphastidae family, which lives in the mountainous areas of Mexico, Central America, Northern Venezuela and the Andes, extending to the south and the center of Bolivia.

They like to live inside the forests in small flocks. It is normal to use the leaves of the trees as camouflage, but due to the emerald tone of its plumage, it is easy that other birds discover them.

The bright appearance of the emerald toucanet

The length of an adult emerald toucanet is about 30-35 cm, and a weight of 180 grams. In appearance, both sexes are equal, but the female is a little smaller and its beak is usually thinner and shorter.

Its plumage is completely greenish, with the tip of the tail of a yellowish pink tone that turns orange. Its long beak is black with yellow to the upper jaw, although it will vary according to the subspecies. Its beak has a white line at the base. 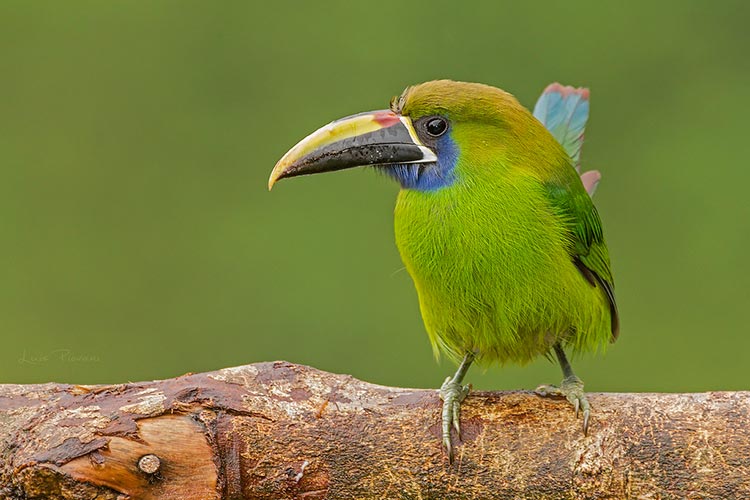 Near the base of the jaw has a yellowish pink spot that turns orange in sunlight. Some members of the family may not have it, and this spot may be near the lower jaw.

Its throat is white, but in some members, it can be blue or pale blue. The eye ring is a blue to red tone, with a darker shade in some subspecies. When they are young, they have a darker shade, both in the feathers of the body and in the throat.

Known subspecies for the emerald toucanet

The experts have recognized the following subspecies:

The differences between each subspecies are based on their morphology and plumage. In some cases, some subspecies may have the plumage tone a little lighter or darker, be smaller or lacking spots in the beak area.

Is the emerald toucanet a good pet?

Many people have this bird as a pet; however, you have to be careful when it comes to getting one. In some countries, such as Costa Rica and Panama, their commercialization is prohibited, as well as their possession, because there is a reduced population. If you have to get one to have it as a pet, you have to get it from a good breeder and with all the relevant permits.

As a pet, it is the best companion. It likes to be with its owner and it is quite affectionate when it is cuddly.

How to feed an emerald toucanet?

The feeding of this species is composed of different types of fruits, so it is not complicated to get a good diet. However, you can also give it other foods to complete its diet. When it does not find enough fruits, this species also feeds on small insects, as well as some small lizards and other types of reptiles that they can take to their mouth in one bite. Besides, you can also feed it on eggs of other birds. It is less frequent, but it is an important part of its diet, since it can receive many nutrients.

When they live in freedom, the nests build them in old woodpecker nests, but sometimes they build them in a natural cavity. The female can lay three to four eggs, both parents participating in the incubation, which lasts almost three weeks. Once the young birds are born, they will remain with the parents for six weeks, before leaving the nest to feed themselves. At first, they may not leave the nest until they have become accustomed to their environment.