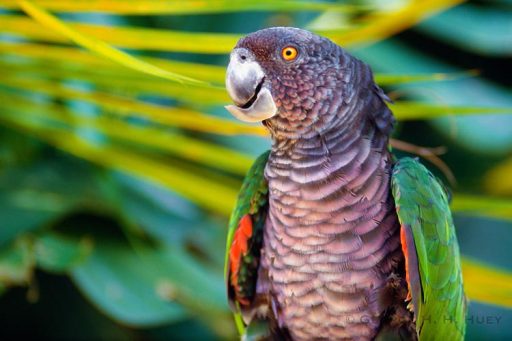 The sisserou parrot is the bird that allows the Caribbean island of Dominica to be pleased of having the largest bird of the amazona genus. Do you want to find out its characteristics? Continue reading because we bring you the essentials of this exotic bird.

Other names of the sisserou parrot

The sisserou parrot, or Amazona imperialis, is also known as imperial amazon. It’s commonly known as Dominican amazon because of its origin. It has also been designated as the national bird of Dominica, an island in the Lesser Antilles. This is why it appears in the flag of this country.

The sisserou parrot is a bird that is highly protected because it’s at risk of extinction, as it’s registered in the IUCN Red List. The most common reasons why it’s endangered are illegal hunting and habitat loss, but also natural phenomena such as hurricanes that strike the island from time to time.

The imperial amazon is a large bird, the largest of the genus Amazona, reaching 45 centimeters in length and its weight can reach up to one kilogram.

The color of the feathers of the sisserou parrot is dark green, and its neck is purple. Its tail is a mix of red and green, but at the bottom it’s purple. The beak is very strong and the color of its iris has a prominent reddish tone.

How to tell the sex of a sisserou parrot

Although there are little characteristics that may give you a sign of the gender, like the bird’s height, it’s recommend that it’s determined by an avian veterinarian.

The imperial amazon is an unknown bird, there’s not enough information about it. But it seems like it’s a fairly quiet bird and has no issues in living with human beings. By now, no subspecies have been recognized.

Is the sisserou parrot recommended as a pet?

Although some people would like to have a sisserou parrot at home, it’s not a pet bird. Many people try to find out why, but this bird usually dies a few months after acquiring it by import. The reason? This may be due to a drastic change in the weather, food, or how hard the trip can be.

There are few parrots that live in cages with bird caretakers. The cage has to be at least 10 x 3 x 3 meters so that the bird can move, because it’s not only the largest specimen of the Amazona genus, but also the strongest. For this reason, the cage should have a special protection to prevent the imperial amazon from escaping.

The details of imperial amazon breeding are a total mystery, even among the most experienced breeders. It seems like it’s not possible to create the perfect conditions for their reproduction, because 97% of the eggs laid by female sisserou parrots are infertile.

Because the sisserou parrot is an endangered bird, in some countries it’s illegal to keep it as a pet. In order to get one, you have to do it through a certified hatchery and obtain a series of permits for its import. Otherwise, a very serious infringement of the law would be committed. Efforts to protect this species don’t stop, but there seem to be fewer imperial amazon parrots every year.